Cool, calm and in control. That's how I've held my last talks, both on the outside... and almost on the inside.

Last June, I held my DevJourney talk at the .NET Day Franken conference in Nuremberg. I was -on a- high. It was the day before the birth of our second child, I was holding the talk for the 5th time, in a very friendly and well known environment where I knew at least half of the 60 attendees. I was full of energy and had a blast. I ran around like a beast, really connected with the audience. It was simply great... and it left me completely depleted. It was not the first time I felt this, just the first time to this extend.

This way of (virtually) being high, full of energy, "vomiting" the talk on the audience, seems to "connect" and actually produce great effects. This talk in question was rated best of the conference after all. But from my point of view, it looked very strange. It was as if I went into a trance and only woke up when I emerged on the other side. It seemed more emotionally triggered than thought through... and this puzzled me a lot.

After those experiences, I decided I should try something. I prepared three different talks and crafted them carefully not to fall into this "trance". Each time I delivered them, I paid attention to really remain in control... and just because I can, I also wore my running heart-rate monitor to see what it looks like inside. Just for fun. 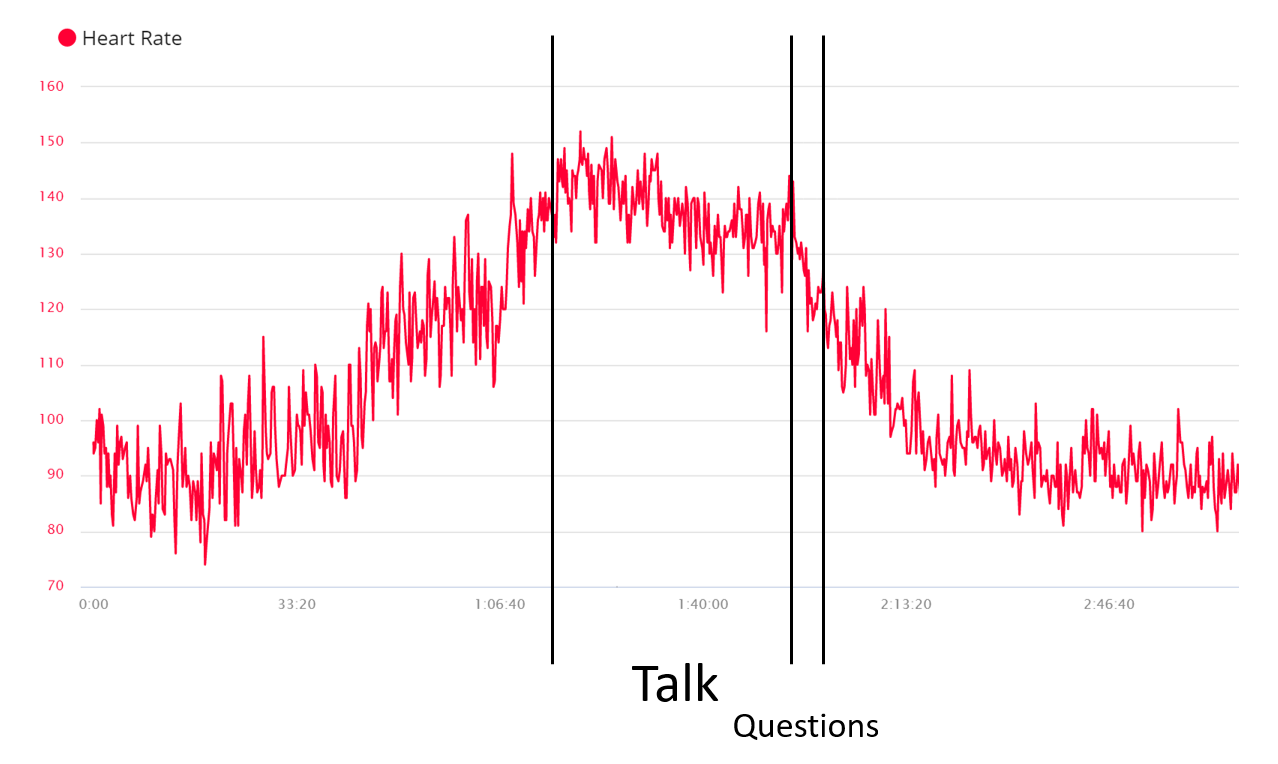 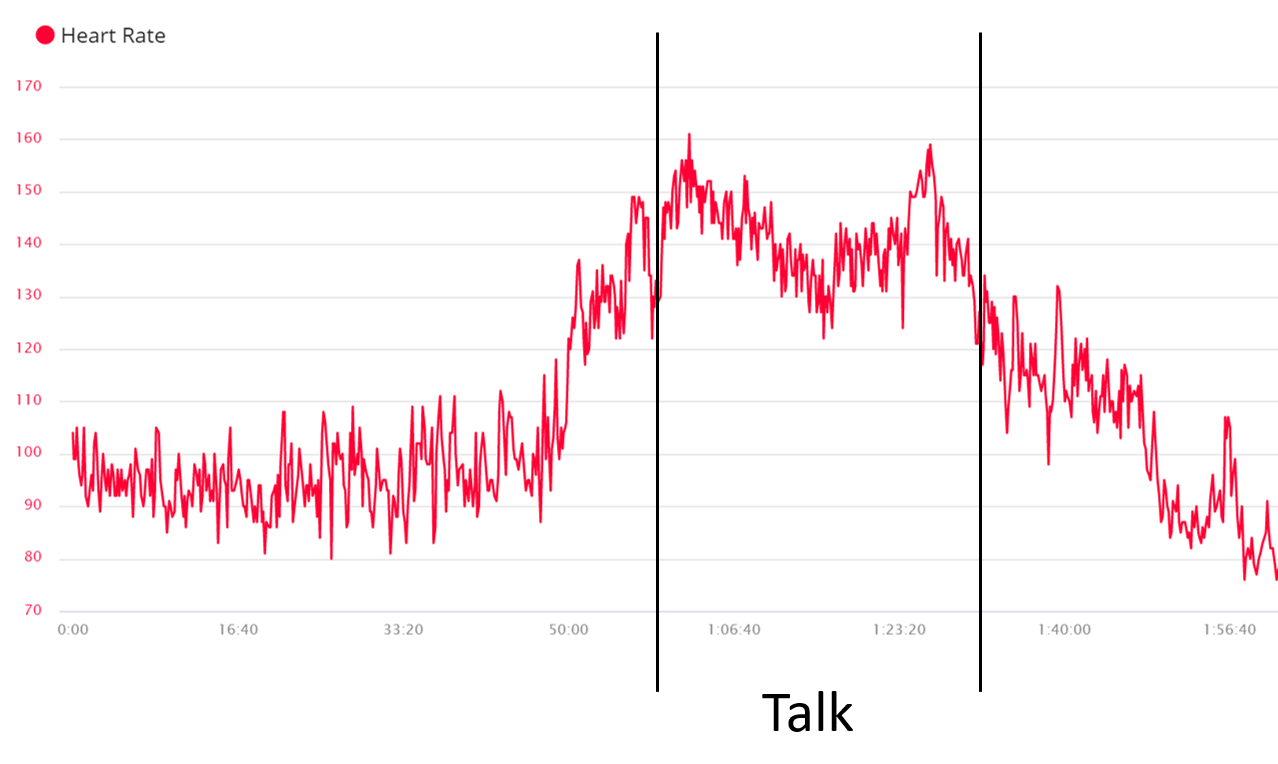 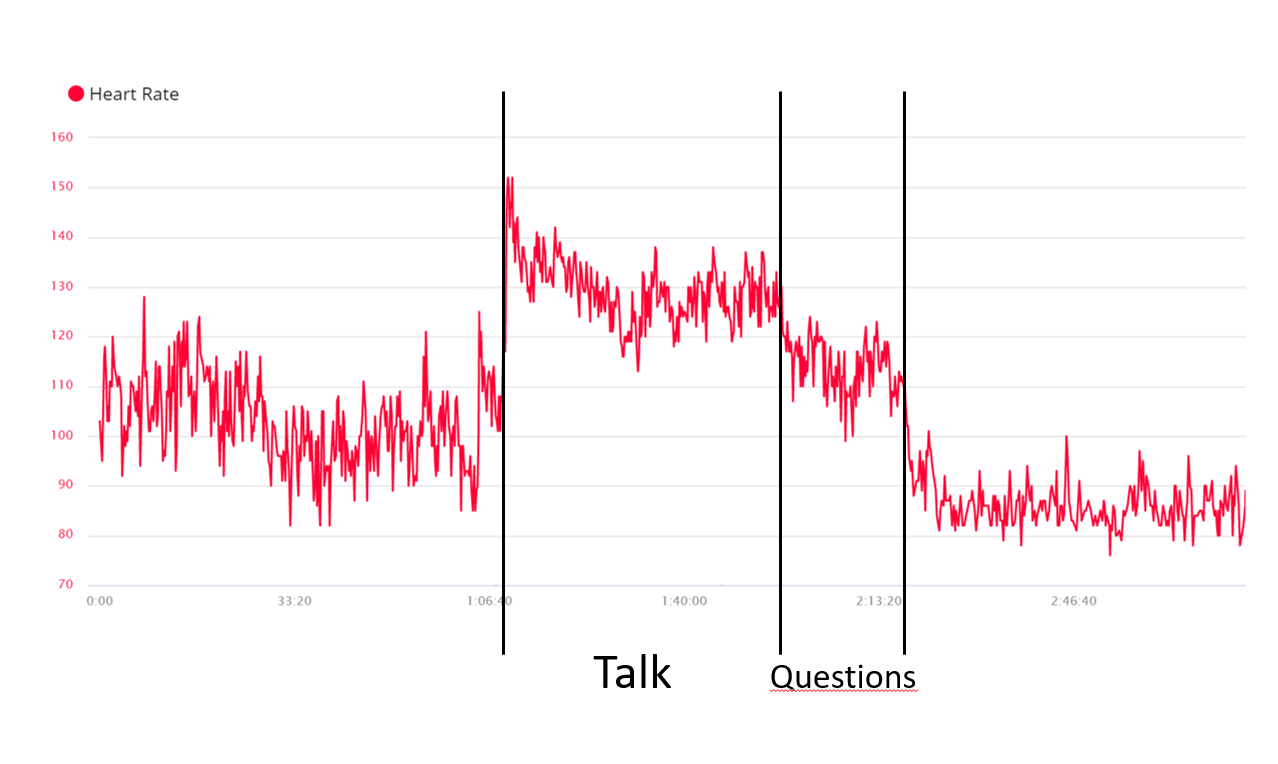 Using those three graphs it seems I am nearly anaerobic (> 150 beats per minute - bpm - for me) each time I hold a talk. Over the course of a 60 minutes talk, this would explain that.

I am not surprised by the numbers above. My next talk will be my 30th public speaking appearance... but I'm still impressed of how freaked out I am in the days leading to a talk. But I stuck to the plan and indeed delivered those talks in a very clean, slow and professional manner... as I had rehearsed.

For those three talks, I received the feedback that I indeed looked very calm, serious & in control. But I also got some feedback from people that thought I was a bit too "slow", that some energy was missing...

In a way, this form helped people concentrate, I saw it connect with some less experienced attendees for which the content might have been a bit "advanced" otherwise. But on the other hand, I think I really lost some experts to some kind of boredom... it wasn't fast enough.

This was a strange exercise. I wasn't in a trance. I can tell you how everything went. But I really think it missed some energy. In a way, when I'm ranting and emotionally involved, more war-stories, more battle scars are coming out, I am taking sides where all the fun is.

Anyhow, it's never too early or too late to experiment. I'm really looking forward to my next 2... or 200 talks to continue searching for my voice!

Tim Bourguignon
3 min read
Soft Skills from Jon Sonmez A while back, I started