"Give it another chance". That's what a colleague told me. Inbox by Gmail wasn't great when it came out in 2015. And it introduced a whole new paradigm, which made it a pain in the ass to adopt. But two years down the line, it's a whole new beast. I gave it another fair try, and I wouldn't go back.

I have always been hard on myself with my Gmail management. Hunting for the inbox zero a.k.a. zero unread emails. Using labels and filters to sort emails from the get-go. I also used stars to postpone important emails while not archiving them. And finally kept my inbox clean and tidy and used it as a very short to-do list. Doing so worked fine, but I ended up with at least a dozen emails camping in my inbox for a long time. Sometimes months. And that's not clean & tidy. So I started using other tools to handle the long lived reminders... which opened other can of worms.

If your workflow looks like mine, Inbox is in fact made for you.

The biggest idea behind Inbox is the postponing system. With a click of a button, I can make an email disappear from the inbox and make it reappear when the time is right. Either based on time, for instance tomorrow or tonight. Or based on your location, for example "when I'm back home". Also, when Inbox recognizes an Amazon package, a new "postpone until the day of delivery" option appears. Using postponing, you can reduce your whole inbox to a single digit number of emails in no time. Or even go for a real inbox-zero. Which looks like this: 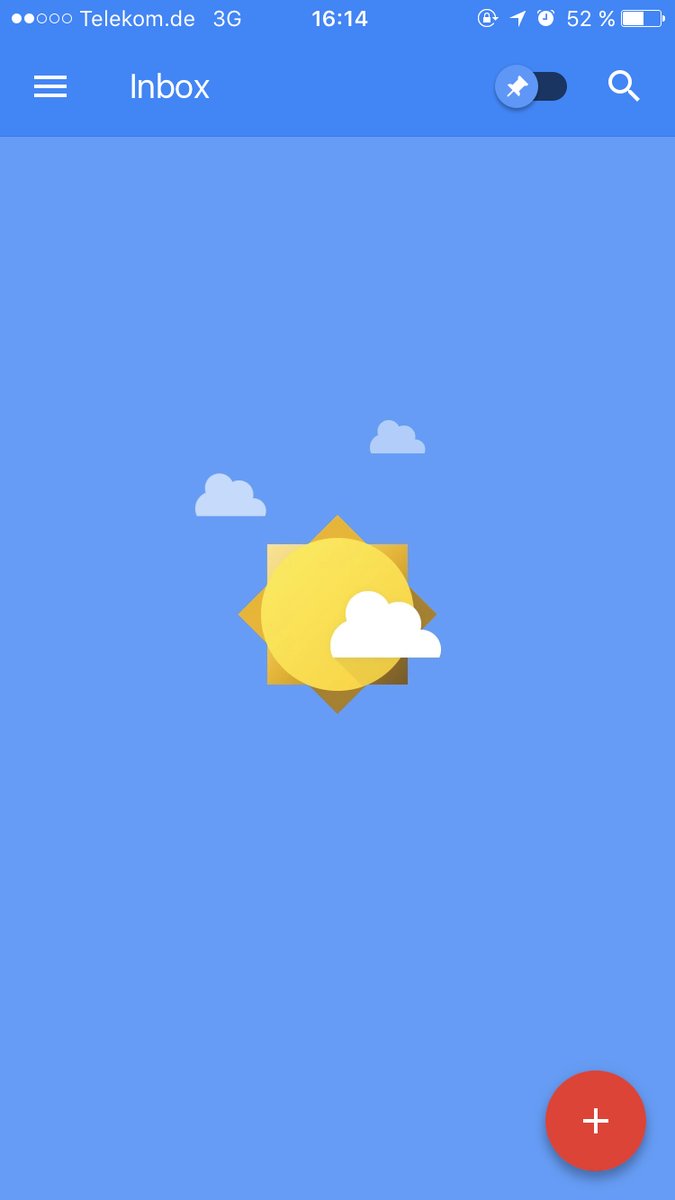 Inbox also has a whole bunch of improvements in bundling of emails and showing them to you "grouped". Important emails should stand out and not disappear under the rest. You can have all the notifications for one service bundled together and appear in your Inbox as one line. Additionally, you can create rules for the bundle and let it appear only at 7 am for example.

Inbox handle emails like reminders in a to-do app, and in fact, Inbox can become that as well. You can create reminders that appear in your inbox and use the exact same mechanisms. I currently have a neat workflow using iOS reminders and Siri so I haven't played with it much yet. And I'm sure there are some more features that I didn't discover yet.

The Inbox UI used to look very different from Gmail in 2015. So different that switching from Gmail to Inbox was very disturbing back then. The UIs in 2017 now look very similar. Both are very clean with few buttons. There are still noticeable differences though. Trying to use Inbox like you use Gmail would still feel clumsy. There is no "mark as read" button & no folder/label management for instance, which made my 2015 self very uneasy.

What I find most fascinating with this story is how quick I was to put Inbox in the "failure box". I rejected the UI and the UX (user experience) because it didn't fit my personal workflow at the time. I had created a workflow based on what Gmail could offer and couldn't replicate this in Inbox. And this disturbed me, even though my Gmail workflow was a hack in itself. I had made the most of the tool, and shaped my workflow onto it. Getting a new tool that was closer to what "should be", didn't feel natural at first, and I rejected it.

And here comes the meta question. If this happened once, how many ideas did I dump down the drain because of... reasons? How often did I act like this? Should I start a list of "things I decided was dumb now and should revisit later"? Do you know this feeling as well?

Photo by Joanna Kosinska on Unsplash