Agility is out there. If nothing else, that would be the least I'd take out of a weekend's worth of work at this years Scrum Coach Retreat. But it lands far from there. I gathered more talks, faces, arguments, impressions and ideas that I could process and will most certainly need time to process it all.

I arrived there with two questions that I partially got answers to:

The format of the retreat was very open and on a "bring your own topics" basis. On the first day, we chose topics and formed teams with which we worked for about four sprints over two days. In the afternoon followed community of practices (open space format) to discuss all other topics that were not chosen for the team activities with as many formats as topics.

What first really stroke me was the absence of predefined content. The retreat is a platform with a very well defined structure designed to help people collaborate on what they came to ask or exchange about. Thus no agenda or constraints but a set of exercises.

One of the first thing we did was to write down the topics we were interested about and put those at a very visible place: on our chests. During the "coffee chat" that ensued, we all took the time to mix and match, discuss those topics with as many people as we could and start mapping our interactions throughout the group.

The next morning, after some exercises defined to break the ice and put us in a good mood, we were asked to write down one information on a piece of paper answering the following question: what answer / information would you be most saddened not to obtain during this retreat? With this paper in hand, we quickly formed the 6 or 7 above mentioned groups with which we then worked for two days.

The group I got into tackled the idea of management involvement in an agile organization. On the content side, we ended up suggesting a "Manager's Sprint", some kind of process toolkit that agile coaches could use in order to measure, visualize and trigger management involvement in a company. As a central piece, we defined the skeleton of a questionnaire that the managers could answer regularly in order to get an idea of where to look for improvements.

But the most interesting part of this exercise was probably the team work that ensued. We were all trained and experienced Scrum Masters and coaches seeing through each others "mind tricks" and games. That in itself made the collaboration a lot funnier. When someone attempted to use some of the tools we use everyday to tease our teams and get them to react in the right direction, like rephrasing, overshooting or oversimplifying to name only a few, we all had a smirk on our face. But all in all, the work was amazing. In a mere 4 hours divided in 4 sprints, we got though very constructive brainstorming, exchanged honest feedback about each other's behavior, got a bit loud (specially me ?!) to steer our product in the right direction while going for the consensus and smallest common denominator. In that small amount of time, we managed to create such a product that I could almost use now and will most probably use in the future. 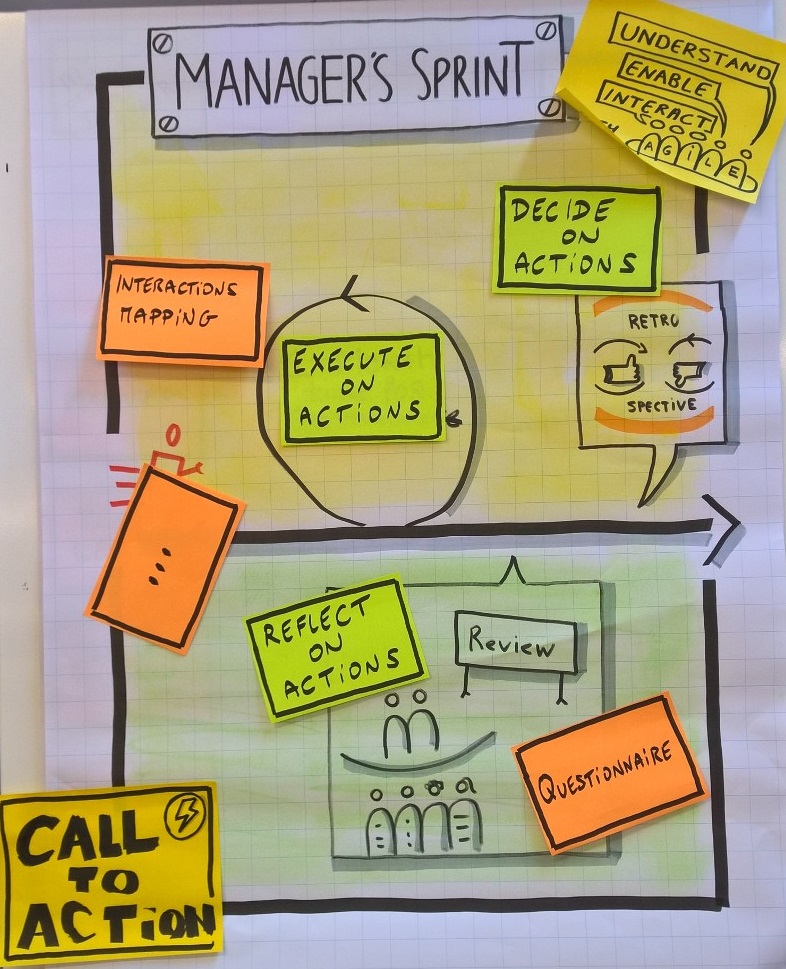 Thanks Jürgen, Martin, Peter and Michael, I really had a great time thanks to you guys!

The afternoon activity was a community of practice, a so called open space. It's a very open format where the topics are not prepared in advance, everybody is free to suggest a theme and hold a session.

I attended a couple sessions about the Scrum Coach certification, a Powerpoint Karaoke and held a fun discussion about agile for families.

Four and twenty then go to bed

Every evening was spent discussing ourselves to death on more or less trendy topics. From #NoEstimates to LeSS and how we could improve the Scrum Alliance itself. A beer Kanban session or an Escape board game were organized… it was very lively.

All in all, the retreat was a great success. I have partial answers to the questions I came with. I networked like a champ' and met a bunch of very interesting people, a few of which I will see or hear about in the near future. I learned tons on how to hold such a retreat as well as tips and tricks on how to get 60 people silent in 10 seconds, open a retrospective with style or ensure that positive feedback is shared at the end of an event of this kind.

If you ever have the chance to attend such an event, run for it, you won't regret it.

@Martin, Boris, Kai & Chistoph: thanks you!

The Phoenix Project has been my 2016's (audio)book highlight.