A couple days ago, I moderated the agile retrospective of 30 developers. Always in search of new ways to drive those meetings, I decided to tryout the Fishbowl style that I had seen twice in practice at some agile meetups. 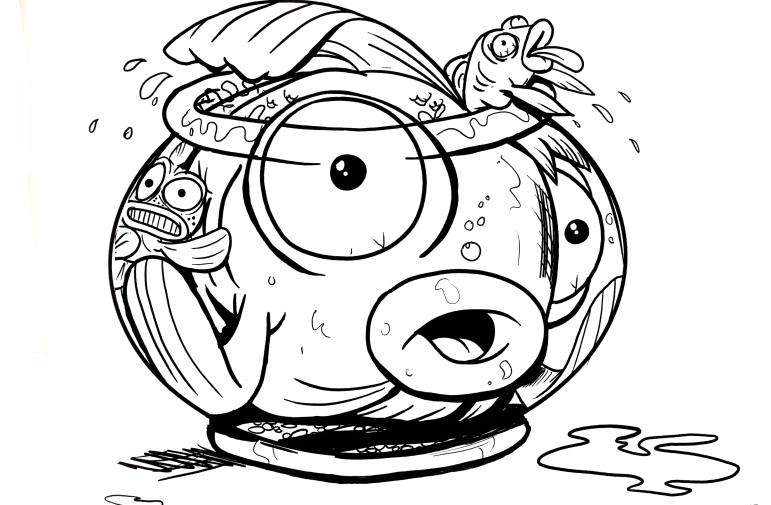 This Fishbowl technique alone does not make a retrospective in itself. It is a moderation trick to bring a big group of people to constructively talk to one another.

The rules (are simple)

This medium has a few advantages among which:

In my opinion, it went very well. The discussion was energized & focused. People adhered to the rules right away. The output was quite as expected although probably not as actionable as I would have wished it to be.

Retrospectively, there are a few points I would do differently next time.

First of all, thinking too much about the format in itself, I forgot that this Fishbowl is only a mean to bring people to talk about one topic in particular. In other words you need to have identified one or more topics to talk about beforehand. Thankfully we had one burning topic that made sense to address right away, but some participants certainly felt restrained not having been able to discuss a topic they had in mind.

Next time, I will organize a brainstorming a few hours before the retrospective and get in the discussion with 3 or 4 topics identified and prioritized.

During a meeting of the .NET User Group a few months ago, the moderator @udowiegaertner organized the discussion as follows:

Back then, this time limit gave (me) a clear idea of the progress of the discussion. If a topic was not really mine, I knew it was only for x more minutes.

This time, although I used a low point in the discussion - that luckily occurred at about 30 min - to artificially stop the discussion and switch to another topic, I didn't communicate the length of the topics beforehand. I wouldn't be surprised if I lost a few participant's attention because of that.

I took a whole bunch of notes on my notebook during the discussion and wrote a protocol right after. Nevertheless, a few participants came out of the discussion a bit puzzled, wondering what we had achieved. For better communication, make sure you use a flip-chart or a whiteboard and write down the information for everyone to see right away.

What about the low-profile characters?

I didn't count exactly how many persons participated in the discussion. Barely more than 40% of the participants. What about the silent majority? Twice in the discussion somebody clearly shot out of the box but was silenced by the loud mouths quite fast and nobody stepped up from the audience to support her.

I fear that the limited amount of seats and having to physically move forward to speak up could refrain some lower-key participants to speak and thus drive the discussion into a local minimum. Any idea how to avoid this and enable the low-profile participants?

Have you experienced a Fishbowl before? What are your impressions on it? Would you like to try? Any fun idea how to handle retrospectives? Hit me via the comments!!!

The Phoenix Project has been my 2016's (audio)book highlight.