Six months ago, I got the confirmation that I would talk at the Javaland 2018 conference. I welcomed this news with enormous joy. Javaland is a conference I had never been to and heard so much about. But a few days later, it became pure dread. I was to talk in one of the biggest rooms. THAT Room, with roundabout 900 seats (thankfully it didn't end up being too packed up - "a few" hundreds attendees at most): 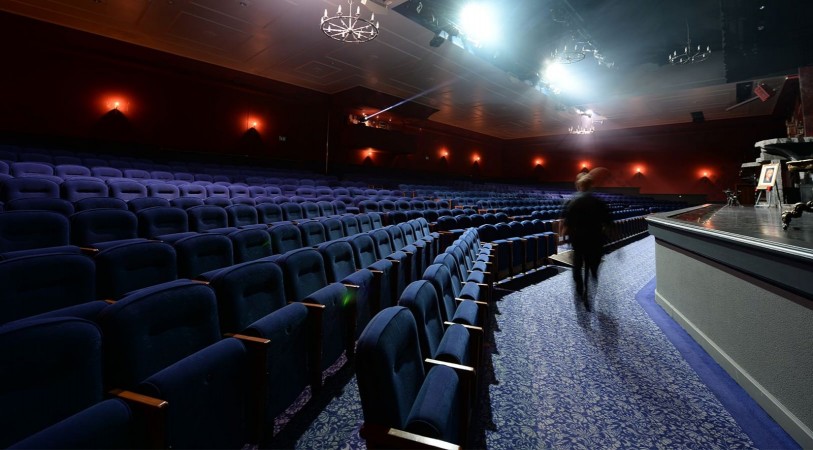 When your talks strive on smaller rooms

If you've seen me talk before, you know how much interaction I build into my talks. I ask a lot of questions. I converse with the audience. I ask for examples and incorporate them into my storytelling. This closeness to the audience makes the experience real, more personal. I love it. But try to do this on a giant stage. Attempt to talk to the audience when spotlights are shone on you and when the audience is pitch black. It is impossible to do it when the closest attendee is 10 meters away from you.

I feared that, in those conditions, my mentoring talk wouldn't be a good fit. I thought I had to try something different. So I went back to the drawing board.

I was very impressed by the talk my mentor created last year about "Failing" (Von einer der auszog das Scheitern zu lernen - Udo Wiegaertner). This talk followed a story and worked very well in a big-room environment. The storytelling made the talk captivating. The immersion into the story countered the need for interacting with the audience.

How I approached writing a story

In 2016 I wrote a story for the t3n magazine (Mentoring: Wie du Mitarbeiter zu Höchstleistungen bringen kannst - let me know if I should translate it and publish here). In this article I described what happened before a meeting with one of my mentees. Waiting for him to arrive, I flipped through the pages of my notebook. Reading my notes, I remembered our previous meetings. Using this mechanism, I projected the reader in the past sessions, one after the other. I was able to describe all the stances I used as a mentor to help my mentee. That is: advisor, listener, challenger, cheerleader and connector.

The idea worked out quite well as an article. So I turned this concept many times on its head wrote different talk skeletons based on it. But something was not working. It didn't click as a talk. So I pitched the-best-I-had-sofar to my mentor, to see how he would react. This was last December.

Help from the mentor

Like always, he had an ace up in his sleeve. He introduced me to the Hero's Journey. This is a writing pattern overused to write stories. Star Wars, Lord of the Ring and The Matrix, to name only 3, follow this pattern. The 4th step of this 12 steps template is "Meet the mentor". That's when my mentor threw in the idea of using the mentor figures from well known movies. I loved this idea right away, but I was still far from the "click" I was searching for.

In the 3 months that followed, I explored many different directions. I wrote kilometers of virtual notes, hundreds of ideas. I listened to a few dozen mentoring talks. I watched about as many movies build on the hero's journey, taking notes all the time. One step at a time, a talk emerged.

On February 15th (less than 1 month before the talk) I finally tweeted the following: 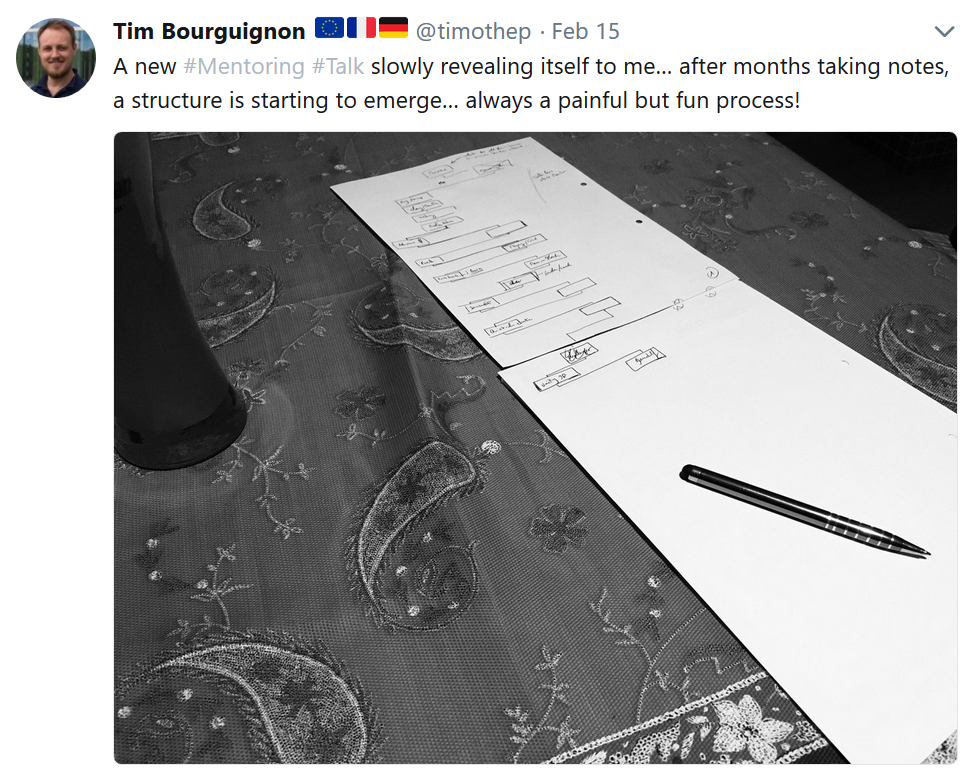 That's the moment it clicked (notice the beer on the left). I had created a new story centered on a fictional character called "Max".

Max discovers mentoring via his boss. But he doesn't know how to act. He decides to take example on well known movie characters. And thus discovers the many faces of "helping people". Without knowing it, Max is following the example of well known mentors. Max is becoming one himself. Those are the different columns on the picture above: Max, his Mentor, his Mentee and the "Meta level" on top of it (Hero's journey applied to the talk itself).

Much better. But something was still not working and I couldn't quite figure out what. Not the right movies? Not the right examples? Reviewing the Hero's Journey pattern, it finally struck me. I needed a mentor in my story as well. So I created one. My first idea was for Max's Boss to forward him to a friend of his, some kind of old - I've seen everything - guy. A bit like the mentor role in the book The phoenix project. And it worked. So I played the whole script back to my mentor. He was as thrilled as I was, except for the mentor character. The link between the mentor and idea of using movies wasn't intuitive. The idea came to me: let's make this mentor an old friend of Max, working in a video rental place. This would legitimate the use of movies. It would avoid the need for lengthy introductions between the characters. It would allow for some kind of built-it friendliness between the two. Perfect!

That's when I did a dry run in my company. I got some very helpful feedback. I could crack some jokes and see if they land. I even recorded myself, which proved to be a great trick. I should write about that too. Thank you all for the great feedback by the way!

Wax on, wax off, polishing some crucial details

Now I "just" needed to work on the introduction, the conclusion and I needed a title. Oh boy, don't underestimate those.

First came the title. One of my mentees helped me with that. I finally settled on "You will never make it alone".

The conclusion came easier at first. I "just" had to repeat the main messages of the talk, out of the storytelling context. Then I "just" needed to bind them back into reality and create an action the audience could take home with them. It took me a few passes to get it right-ish, but it worked fine... before I rewrote and extended the whole thing for the third occurrence of the talk.

And then came the introduction. This again took me an awfully long time. I made it short, then long, then short again. I mixed many ideas. I tried to build a crescendo that would introduce the need for helping each other. All this while keeping it short. It took ages. This was what I kept on thinking about on a 4 days vacation I took with my little family. But I finally nailed it as well. One day before the Javaland talk.

I finally had a talk. I held it for the first time at Javaland, in English. The room was pretty packed and the feedback was great. A few days later, I held it as a keynote at the DoSE - Agile Lead Camp, this time in German. And a few days later came the third occurrence in a private company. Three times in a row. That was a marathon. It was an awesome experience each time. 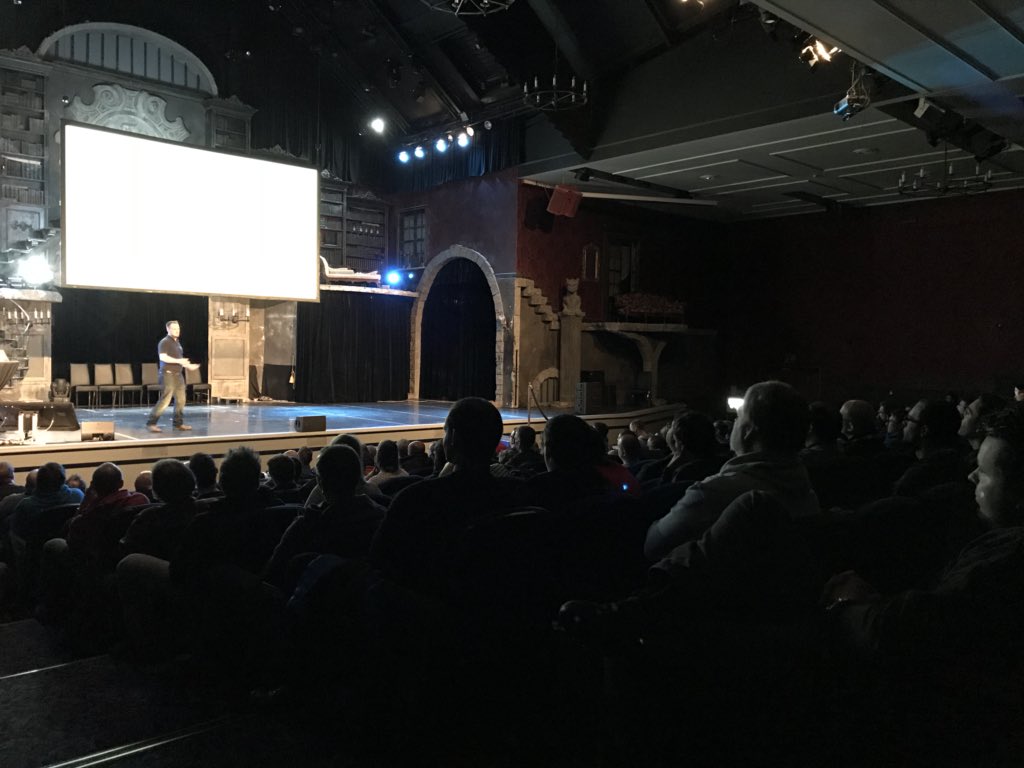 Here are sketchnotes (in German) that Ollihoog drew during my keynote at the DoSE Camp: 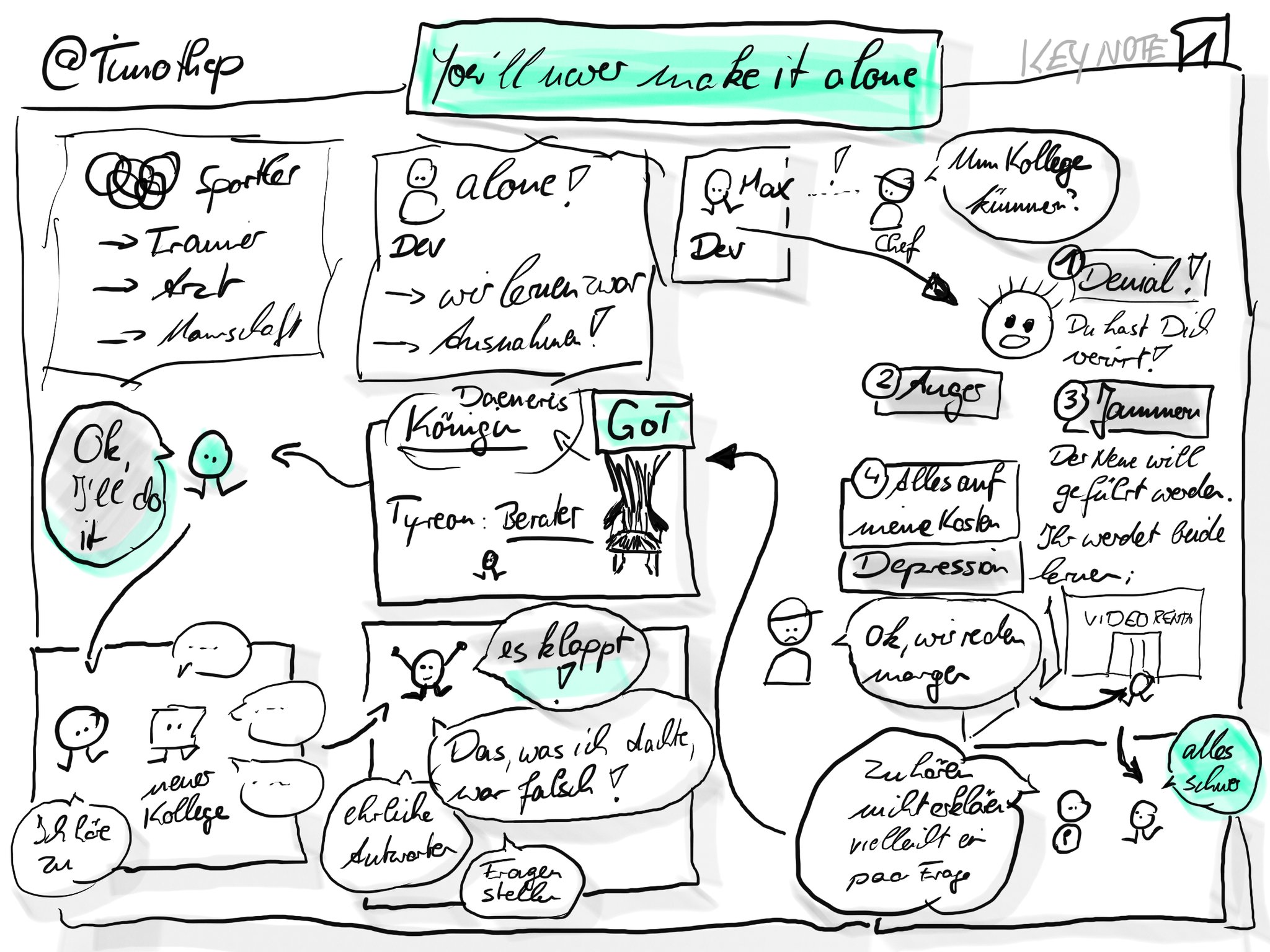 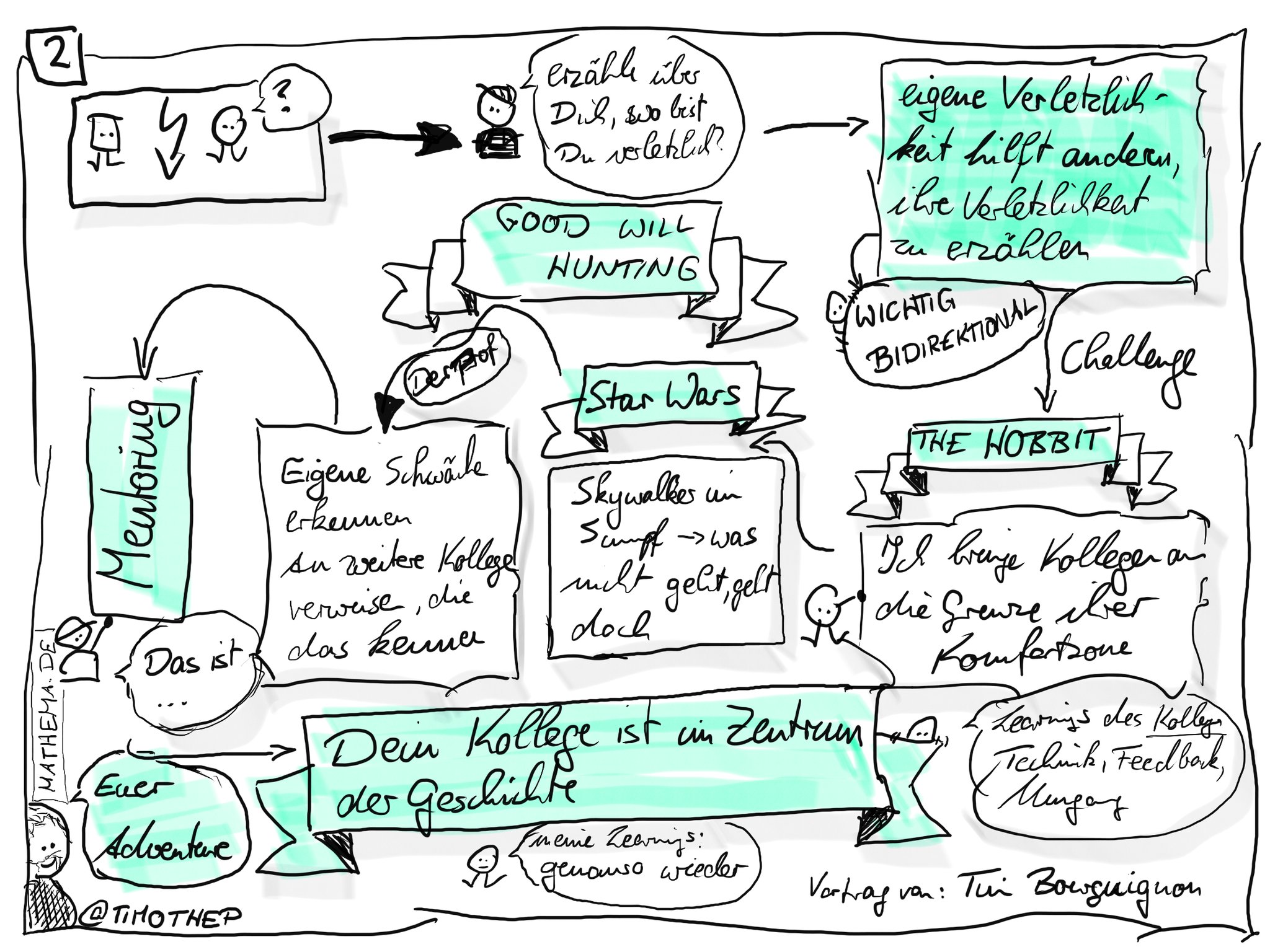 Presenting the same talk 3 times in a row has some advantages and drawbacks. I won't list them all here. But I would like to go over one in particular.

As I learned the hard way in 2016, I need to be on speed and feel pressed by the time for my energy to come over "right" on stage. I noticed that the Javaland and DoSE setups were perfectly tight for that. I hit the 40 min mark at Javaland without really looking at the timer. I had a hard time reaching the 30 min mark at the DoSE, but I managed it anyway. In both occurrences, I had the feeling I had forgotten or omitted some details, but I spoke from the heart, rarely looking at the presenter notes. It felt right.

For the last occurence at this private company, I had 60 min... and used them. I gave more details. I expanded on some stories or movies and tried to make the whole talk a bit more consistent. In the end, the result was good, and the feedback was well. But I can feel something was not quite right. It took me a few hours to realize what it was... but now I know.

Presenting those right after the other made this really obvious. That's not a drawback... ;) I really have to pay attention to that.

End with "why" (wink Simon Sinek)

I cannot count the time it took me to create this talk. 50? 100 hours? More? I couldn't say. It spreads over 6 months. Many times a week, heck even many times a day. It was in my daily life. It was in my head all the time. I took notes at the weirdest moments of the day and night. And it took many evenings to piece this all together. But it was well worth it. I learned more in the process than what the talk actually conveys. A pure example of altruistic egoism. I'll do it again any day for sure.

That's it. After my 2016 the art of speaking-a-la-tim article series, I just wanted to give you an impression of what it took me to create this talk... in a way that was very new to me.

Last but not least: Many thanks to you Udo, I wouldn't have made it without you!

Edit 2018.05.05: thanks to the organizers of the Agile Lead Camp in Berlin, a recording of the talk in German can be found here.

In the first part of this series [https://www.timbourguignon.

Tim Bourguignon
3 min read
* Have you ever felt hyper-energized by working together with someone?