The year is still very new and I already have published a new App in the Windows Phone App Store: PicsSort.

After switching from the iPhone to the Windows Phone world, I was surprised to find one exact same issue on both sides. Both devices allow Photo Albums but none allows you to sort pictures / move pictures from one album to another on the fly. Since moving pictures was finally allowed in the Windows Phone API via the Win8.1 Update, I decided to write a simple (free) app for it.

PicsSort does not have much more than the screen you see below. Pick one or more pictures, select (or create) an album, and hit "Move Pictures" to move the pictures from their current location to the album you selected. 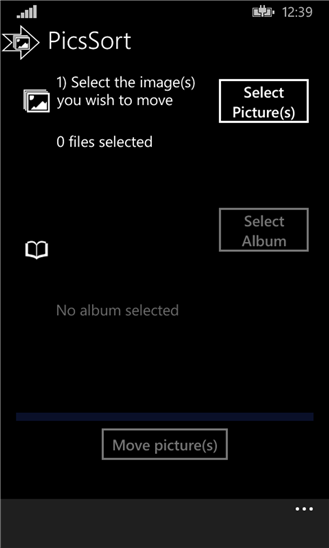 I hope you'll enjoy that app, don't hesitate to leave a rating & review comment on the store, it'll help others find the app and reward (or hurt) my ego! And if you find any issue, let me know ASAP!

This post is going to be short... but at least

Tim Bourguignon
1 min read
Ever heard of the term MVP (Minimum Viable Product)? It stands for a minimalistic version of a concept that suits the user's needs to get feedback or answer a question. The goal is to deliver value fast and incrementally add features as you discover what is right.