Last year for Christmas, I made a few Geeky-LEGO-Magnets giveaways. My son ended up being quite fond of them so kept a whole bunch for us. 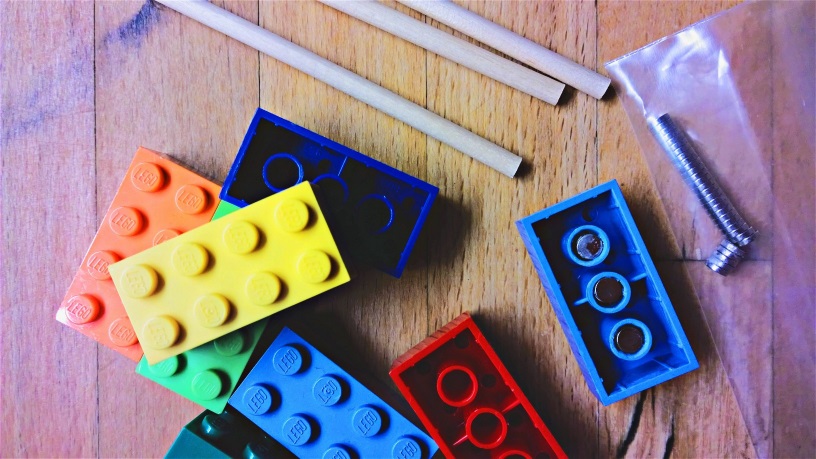 If you like the idea, here's what you'll need to make a batch on your own:

I found the LEGO bricks directly at a LEGO store in Nürnberg. You can buy a cup and fill it up with whatever you want. I ended up with 50-something 4-by-2-Bricks. Basically, this idea applies to any of the LEGO bricks... you'll have to tweak the tutorial depending on the height of the bricks though.

The bricks are 9.6mm high on the outside and about 8mm high on the inside. So you need something that is about 7mm deep and 4mm in diameter to fill the gap and have the magnet "right on the edge" of the brick on the outer side.

In order to do this I chose the easiest/cheapest material I could find: small wooden sticks. Chop them of in small 6.x mm-ish segments (the cut is rarely really clean, so the 6mm-ish segment ends up being almost 7, add the glue and you got 7) and that whole is filled.

All is left for you is to put the whole thing together... which can be a little bit tricky due to the strength of the magnets.

If you first glue the sticks in the bricks and then glue the magnets on top, you will have some trouble putting the magnets on. As soon as one magnet is placed, it tends to attract the magnet beside him before the glue has stuck it in place. So you have to find a right balance between speed (how long you wait for the other magnets to dry) and tools to put the third magnet in place. I glued the magnets following this order: outer left -> outer right -> inner one. The two outer magnets didn't attract each other. As for the middle one, I had to be really precise and hold it in its place with another wooden stick longer than I would like to leave my fingers in contact with instant glue;)

Once you've got the trick, you'll be producing those faster than you can think. Or at least with a movie on the side you'll be done with some X-Mas goodies before the end of the credits;)

I would like to use LEGO "Men" as well, but I haven't found the right magnets yet. Either too weak, or not the right size (those feet are really tiny)!