After a month and a half in the store, a short notification, my first paid Windows Phone 8.1 app, earned me a grand total of... nothing. I paid the app myself twice (just to see) and two good friends of mine bought it as well (yes, they're sport :P). Well, not really my ticket to freedom... yet.

One thing I always wanted to try was to use one of those community sites marketing your app to their community in exchange of you making it free for one day. Scam or not? I submitted the app on myappfree.it and was surprised to see it accepted. After some preparation, the date was set to yesterday, August 29th and the least I can say is that it was... interesting.

Due to some potential caching issues of the Windows 10 store and to be sure it is updated globaly on the 29th, I released the app for free on August 27th. Then I started my different dashboards to observe the downloads and usage:

It was a few long days

As soon as the free app reached the store, I saw downloads coming in. Those spiked on the day of the event and rapidly decreased to a still stand as soon as I put it back to paid...

*MS App Insights can only collect data when the app is started, thus the "new users" being lower than the downloads.

The MS Application Insight numbers tell us that from the 5924 downloads, only 2951 e.g. 49% actually started the app sofar.

As you can see, I finally saw some paid downloads coming in in the last few days!

The organizers of the promotion sent me some logs afterwards. The app was viewed 50.000 times through their app, 16.000 users clicked on it and my numbers say that 5000 among them ending up downloading it. This represents a 31% conversion rate for the community, and another 30% conversion rate from the Appstore... I had expected more. I wonder if this could hint at a problem on the description of the app. I changed the description to something a lot more comprehensive and will roll this out in a few days. Time will tell.

The best effect of this action is probably the comments. I got more than 100 new comments in one day amounting to an average rating of 4.3/5 stars. I also got a lot of new ideas, suggestions and a bug report. Nice!

Although I translated the app only in English, French and German (I still need to have that reviewed by a native speaker though), the users can comment in whichever language they like. As you can see below - without translation - the comments are... hard to follow. 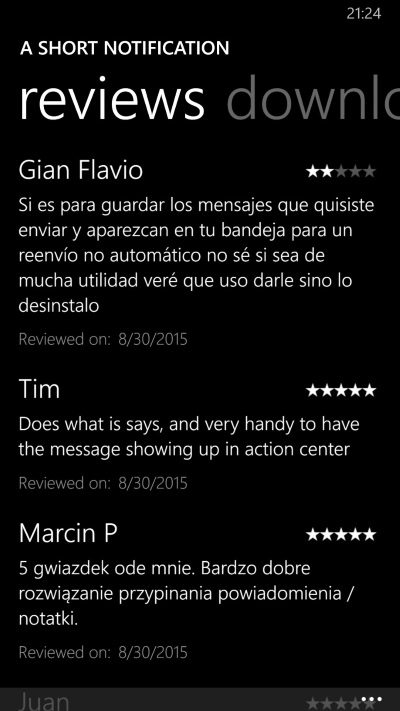 Thankfully, the Web dashboard uses the Bing-Translation tools to translate each comment... which makes it way easier to get what people are trying to say (most of the time).

The Win10 developer dashboard took over the "answer" capability of the Windows Phone 8 store. So I took a few minutes everyday and pretty much answered to each and every one of the comments. About a dozen of users already replied and/or changed their rating after I cleared some misunderstandings.

I still don't have enough data to observe a real trend, but I can quite certainly say that the whole action had a positive outcome.

It's not the million$ I was (not) hoping for, but those 8 new downloads that I seem to have really earned are a tremendous raise compared to what it was before (0, remember?). Will the trend hold and people continue buying the app? I sure hope so, but I can't tell. Time will...

Now I need to polish a few and old features, tryout new ideas and dive down in the Application-Insight numbers to really understand how people are using the App.

Any thoughts or comments about this?

The "Zone" Creating software is like building a house of

Tim Bourguignon
3 min read
This post is going to be short... but at least